The Uganda Electoral Commission announced incumbent Yoweri Museveni, winner of the 2016 presidential elections even though, by its own tallying, results from 1,787 polling stations have not been transmitted. That number is even more striking when you see where those uncounted polling stations are located. Nearly 90% of the polling stations left out are in just 9 districts. At the top is Rukungiri, Kiiza Besigye's home district, where votes from only 3 (1%) of the 276 polling stations were counted.

Why would they not count votes from 281 Kampala and Wakiso polling stations? If it came to it, you literally can send a bodaboda from the Electoral Commission to any part of Wakiso or Kampala to go fetch the returning officer and his paper tally. You people, Buganda has in the past, threatened to secede over much smaller slights!

But all things considered, we, the Baganda, will now take several seats. We give the right to threaten secession over to the Bakiga, Basoga and some quarters of Tooro. From Rukungiri, Jinja, Kyenjojo and Kabale, nearly twice as many polling stations were excluded as from the rest of the country combined.

Edit: In response to a colleague's request to quantify the number of votes not counted, I estimate it's about 741,000 votes. Using the Electoral Commission's data I calculated average number of voters per polling station in each district and voter turn-up by region. I then multiplied by the number of polling stations whose votes were not counted to get an estimate of votes not counted. The nine districts with big undercounts were excluded when calculating voter turn-up in their regions since they would artificially skew the data. Here is the spreadsheet.


This graphic shows how many of the uncounted polling stations came from where. 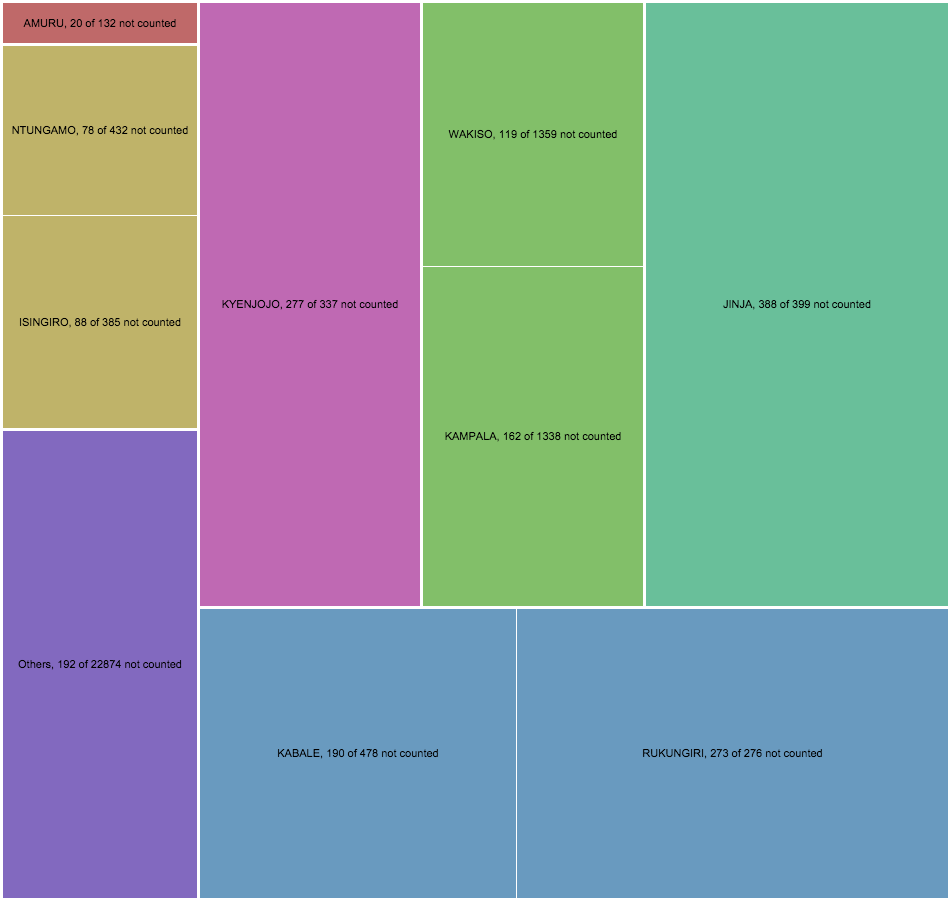 PS: It is Uganda Bureau of Statistics, not I, which subdivides Uganda along the tribal/colonial regions indicated above. Not I. Me, I am neither tribal nor colonial.
Posted by NamLyd at 11:18 AM No comments:

423 Incidents of Political Violence Involving the UPDF on Foreign Land

One candidate who delayed his entrance to the stage for over a minute, may have jinxed the Uganda presidential debate thing for those of us watching from outside countries. My NTV live stream died right about then and remains off.

But, speaking of Uganda's foreign policy, here is a map showing some 423 foreign battles that the UPDF has engaged in over the last 18 years. Data Credit: ACLED. It is a University of Sussex project that curates (from the media and other sources) reports of battles and other forms of political violence.

If you click a bulb, you will see some notes on what the incident was. I have colour coded battles with other armed forces as yellow. Yellow also includes instances of remote violence; like air strikes and large explosive attacks. Green is for incidents that are related to conflict but not violent themselves -- like setting up a base. Red is for violence against civilians and rioters/protestors.

For Somalia, I have included only those incidents that were specifically attributed to the UPDF, not all AMISON action. Evidently, I have excluded domestic incidents. You can see the domestic picture in an earlier blog here.
Posted by NamLyd at 9:55 AM No comments:

First of all, a round of applause to Javie Ssozi and Evelyn Namara, for surfacing the fact that the tallies in the Electoral Commission voter counting are off by 20,000. Yeah, 20,000! You can now start telling trolls, “you missed the point by 20,000.”

However are the 20,000 ‘ghost voters’? I kind of wish they were. I don’t like vote theft but at least that would be an active and intentional scheme. More likely though, it is more evidence that the people we pay with our taxes just can’t be bothered to show up at office with their heads screwed on. The electoral commission is headed by a mathematician. Badru Kiggundu was the dean of the faculty of technology at Makerere University for a long time. When he wants to stuff the voter register, he will know to run the data through excel and make the tallies match. In this case though, he and his staff just don’t give a hoot what the voter register looks like. They collected wrong tallies from the different polling stations and just threw them onto the page. They didn’t expect anyone to take a second look at. It isn’t the Ugandan thing to do. (Thanks again Evelyn and Javie, for being the exception).

Why do I think this is clumsiness rather than malicious register stuffing? I work with government generated data all the time for my data journalism classes and writing work. Also, when I worked with Marie Stopes, a reproductive health NGO, I spent a year in close and painful proximity with the national health information system. It really is sad how much the government just doesn’t care about data quality.

When we look at police crime reports for our trainings at ACME, the first thing we do is create our own totals. The working journalist will tell you there is no story in the discrepancy between our totals and the published crime statistics. The published police numbers are always off. By the thousands. And how could they ever possibly be accurate? Everything; from how crime data is collected, transmitted, tallied and reported takes the attitude that numbers don’t matter. Essentially, this is how the police generates crime statistics. In the best case scenario.
The only point at which automation or computerization enters the process is when someone is typing the annual crime report. In this day, when for a few million shillings, you could build an SMS based reporting system enabling each police station to submit their day’s record directly to an automated dashboard at police headquarters, police officers are hand delivering handwritten, inaccurately tallied paper records, as if we are some pre-technology civilization somewhere in the Kalahari desert.

The recording of national health statistics isn’t quite as rudimentary but not much better. The village level clinics (which government preposterously calls health centre 2) fill out a paper form at the end of the month, take the physical copy to the health centre 3 above them, which tallies that area's statistics and submits that tally to the health centre 4, which tallies a larger area and sends it to the district. In some districts, there is a computer loaded with the district health information system which feeds into the national health information system so automation happens at that level. In others, those hand filled forms will later on, be submitted to the ministry of health here in Kampala. If some are lost along the way, rained on as the district health officer makes their way off a bus in Arua park on a rainy morning, well, then, that's tough luck for whoever cares about national statistics.

Of course, by the time you generate a final statistic out of this kind of data process, the numbers are schizophrenic. Everybody who could have, has had their opportunity to introduce their own variety of error. The guy who can’t count submitted his wrong tally. The district officer who didn’t want her region to look too bad (in crime or ill-health) has done her doctoring. The overworked clerks have missed digits here and there. You wouldn’t even know where the errors came from. You wouldn’t know how to fix any of it. In any case who wants to fix any of it?

I suspect, the electoral commission’s data collection and transmission is not much more evolved than the police or health information system. Voter numbers and tallies were sent up the electoral administration bureaucracy as if the commission headquarters didn’t have an electronic version of the register itself. Nobody could be bothered to quality check the information, because really, nobody in this country (except the good folks at UBOS) believes that accuracy means anything. When you don't think data quality is even a thing, you have the electoral commission publishing tallies that are sometimes even less than the right total. That's no way to stuff the register but it certainly is a way to show yourself as stunningly clumsy and careless.

I personally get actively suspicious only when I see wrong numbers coming out of UBOS. Those guys don’t make mistakes. If they publish the wrong statistic, they are deliberately doctoring. Everybody else, just deflates me. In my experience, they are just plain clumsy or they don’t give a hoot about what information they are putting out there. That, on some level is an even sadder reality. The fact that Ugandans default to mediocrity in every job we are given, makes me hopeless.

Last week, I explained to my professor, Steve Coll, that I signed up for his 'Armies and Spies' reporting class because the army is a huge part of public life in Uganda. At that point, I was thinking of oddities like: the UPDF runs agricultural extension, the Miss Uganda beauty contest and as of last week, spraying urban pests and rodents! Plus, that, for 15 years now, the police has been headed by active army generals.

Saying out loud that "the army is a huge part of public life",  got me wondering what our actual lives then look like, seen through the barrel of a gun.  So I went to ACLED, a service which curates incidents of political violence in Africa and Asia to check that out. Using their data for 1997 to 2015 , I created the heatmap below. Behind it are reports on 4612 events of political violence: battles between warring parties and unreturned violence on civilians.  That is; one armed conflict incident for every 36 hours of the period. I suppose the bloodbath picture in northern Uganda isn't suprising, because there was a war there, but look at the rest of the country! 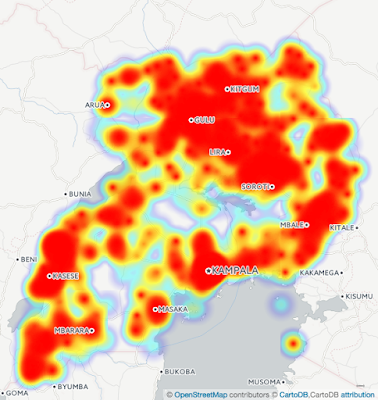 Right after I pulled that data, I saw a TV clip in which Museveni was boasting to a crowd that because of NRM, Uganda is peaceful for the first time in 500 years. Really?! How did we survive extinction in the 500 years prior to NRM?  4612 incidences of political violence in the most recent 18 years of the NRM epoch and that is what peace looks like? What did the opposite of peace look like?

Then again, maybe the army has just been proactively defending us from the bad guys. Of course it has been. 40% of the time. In many (but a minority of those reported incidents), the defenders of our freedoms were totally doing battle (or getting set to) for us.


However, while the defenders of our freedoms were away somewhere, more than 80 different groups of armed bandits and the Uganda Police (for I dare not call them bandits ) were having their day shooting at civilians. Of course,  the LRA ranks highest, followed by the ADF and Karimojong militia. The Uganda Police holds fourth place. Hey, even the UPDF got in on the action against civillians -- in 22 of the reported incidents, taking fifth place. After those five, the arena of armed men against civilians splits into a riot of actors. See all them below. Bokora Ethnic militia? Banyole Ethnic militia? Ikuruk? Really? Is my household the only grouping of Ugandans left out of the action?

Mr Museveni, considering the national picture, I suggest we now start to measure peace in per capita units. That will keep us on message.

Posted by NamLyd at 5:35 PM No comments: