Look, I am a professional woman. Part of my mantra is; thrive despite the sexism. That being said, I am picky with what sexism I must deal with. I don't go to Owino because the sexism there is too basic and I'm paid enough to curve it. Unfortunately, I find that the level of sexism among my fellow journalists is approaching that level of basic. I don't even know what I will do. I kenat!
For two days, a discussion on women in the media has raged on Twitter. Why do we have so many all men panels (manels), so few women voices in the media (22% of people interviewed, 12% of those who make the news), so few female journalists in as newsrooms (4 of 24 writers at The Observer reporters, although generally we have gender parity among working journalists). A lot was said. Then as happens in these things, the opposing side argued that women are either uninterested (especially in political discourse) or incompetent and potentially unethical if hired (see photographed text!). 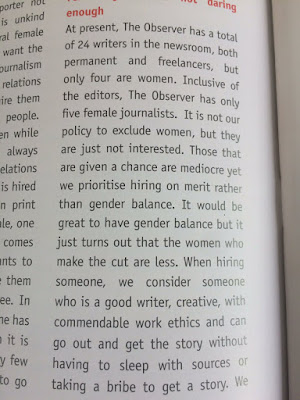 I would like to be on more talk shows but I'm not invited (I guess, planned guests don't cancel that much), but I would also hesitant to go. Studio are small spaces I generally prefer to share them with people I don't already want to punch in the face. I am also not keeping my long term faith in a Ugandan newsroom career. As I learnt when New Vision salaries were made public, that would be the wrong financial choice to make as long as I have a vagina.

So, yeah, newsroom managers, men who get onto talk shows because other men know them, and everybody else with Twitter time, can say all they want about how it's our fault. But people who become journalists are generally people who don't take bullshit. So, surprise, surprise, we aren't going to show up for your casual and basic sexism!
Posted by NamLyd at 8:16 AM No comments: