Like a lot of people, salary leaks are my favourite corporate scandal. I don't really care for news on which boss is sleeping with which junior employee or what politics precipitated so and so's firing. That's just mundane in a workplace. A salary leak? Now, that's truly juicy.

But salary leaks very quickly become depressing. Every time I have seen a leak, I am astounded by how many people I thought of as peers, are in fact so far out of my league. There's always a certified office buffoon who earns so very much. More painfully though, salary leaks remind me that; I can work as hard as a donkey and as smart as Richard Branson, but as long as I am a woman, I probably should continue to explore the option of marrying into money. Every company I ever worked for hired far fewer women than men for high paying jobs and on average paid them less than their male counterparts in the same circle. Now look at the latest leak --- the New Vision salaries. Of the 25 top paid officers, only 7 are women and they on average earn 6% less than the men in the same group. Indeed only 27% of the pie at that level is availed to women. But why? Why? Why us?

Waama reader; in the chart below, the pink blocks are women's salaries, and the blue are men's--- seeing as we are sticking with sexism. I have excluded the names and positions related to each salary because munange, they are highly paid people in my industry. I dare not bite the hand that might feed me in the future. But, if you bought today's Red Pepper... Or if you discreetly run your cursor over the graphic... ssshhhh

So, now I have to marry a Ugandan for the citizenship?

I have to confess; I hadn't been very enthusiastic about registering for the national ID. They gave the contract to collect personal data on all citizens of politically aware age to the army! Call me paranoid but I think the Americans in the NSA went green with envy on reading that. "We had to build really sophisticated technology to steal that kind of data and the Ugandan military has people walking in, lining up all day to volunteer it? That's hardly fair," said a guy in an NSA cubicle.
However, for some strange reason, my reluctance to register seemed to offend my mother personally. Something in her voice as she reminded me (again) that the deadline had been extended again told me she would never forgive me if I ended up losing my citizenship for non-registration. So, on the afternoon of the last day of the last deadline, I took off from work and went to register for my 3rd national ID (after the passport and driver's licence). I left my computer running, imagining that it would no more than 30 minutes. It would take me 6 hours to NOT register.

At the nearest registration point to the office, they didn't have forms, so they referred me to two other possible locations. I decided to play it safe and went to the division headquarters (I live and work in the same division). Sure, they had forms but couldn't register me. Apparently, the team at that location didn't represent the division but a particular parish, Makindye 1. I was educated that I in fact live in Makindye 2. From their explanation of these demarcations, I buy my vegetables from Makindye 1. Anyhow, I went to Makindye 2.

Apparently, I offended the registration team at Makindye 2 merely by walking in with a registration form. I had flaunted a business model they had going --- to sell the registration forms. Also, I walked onto the grounds with a motorbike safety helmet, unkempt hair and English on my tongue. I had lugezigezi written all over me. So they mitigated the problem that I obviously was, with hostility. "I am not the one doing registration. I only issue IDs. Talk to that gentleman over there," said the guy sitting at one of the two computers. He pointed to some dude fiddling with his hand on a bench. He looked like what he turned out to be - a parish chief.

"Do you have a resident ID?" the parish chief inquired with disdain. "No, but I have my passport. "Passport?" he rolled his eyes. "How do I know you are a resident of this place. We can't register you," he dismissed me. What do you think I did? I am Lydia Namubiru. I started reeling off all the facts I know about the ID registration process. That; I didn't need a resident ID. That a passport or driver's licence was proof enough of my eligibility to register. That, he was abusing his office. That people like him are the reason why government projects fail. No, I didn't under-do my rant. I never do. And yet, some idiot still had the audacity to call me aside and offer me an LC residence letter if I could 'get' him sh5000. Cue another diatribe about corruption from yours truly. Who did I move with my self-righteous rant? Nadda a soul. They all just looked at me like I was a wild fire that would eventually dissipate, pay sh5000 and get in line for registration. So, I pulled my own corruption move. I announced, "I am a journalist by the way. If anyone of you expects me to give you a bribe, it is not going to happen." You won't believe how many bribery solicitations I get out of by saying I am a journalist. You should try it. So once again, it worked for me. The parish chief took my form, inspected it, threw a minor tantrum about my declaring no religion but grudgingly wrote as required, "Citizenship Approved." Then he smiled and said, "you are number 41 in the queue so you'll have to wait." They were registering number 28 so it didn't look too bad. I leaned against a car and waited.

Let me tell you; corruption is a creative art. It was about 3:30pm when I got onto the queue. In the subsequent two and a half hours, the one lady doing the registration entered data for exactly four people, one of whom hadn't been on the queue. He was just a corporate looking guy who stepped out of the crowd, 'talked' to one of those LC type people who were hanging about the place and was then guided to the registration table. The whole place was as lethargic as the registration was slow. However, when the clock ticked 6pm, it came alive. The parish chief started packing up things, starting with that second computer that hadn't been used for registration. Then he declared, "the registration deadline has been reached. We only work up to 6pm. This lady is now working on her own time. If you want her to work on you, talk to her." Cue commotion by Ugandans desperate to retain their citizenship. The same ones who had each paid sh5000 to get residence in their home area just 3 hours earlier. The parish chief, of course, came in to rescue the situation. He would handle those who wanted to 'talk' and then hand their forms over to the registration clerk thereafter.

There is something incredibly sad about watching people empty their pockets of coins and cramped notes, amassing all of sh3000 each to give to a parish chief who looks like his own economic status has never allowed him to dream of a sh20,000 bribe. Miraculously, the registration clerk's speed picked up, Between 6 and 7 pm, she registered another 7 people. Only two ladies and I, walked away unregistered. They just couldn't find the sh3000. One said that to get the residence letter, she had bargained sh1000 off the going price, and borrowed sh2000 to pay sh4000. Now she just couldn't marshal another sh3000. Another was an 18 year old student who figured that if police ever kicks down the door asking her for the national ID, she'll just knock a year off her age and get away with it. Apparently, there is a story going around that police will be doing that -- kicking doors down at night to demand for national IDs. I thought of lending them the sh6000 but I didn't have change and didn't see that parish chief giving me back any bit of my sh50000.

As for my won registration, I figured that I will just marry a registered Ugandan and that way secure my citizenship. Plus, a parish chief already approved my citizenship and I have the proof. Surely, that is a start. 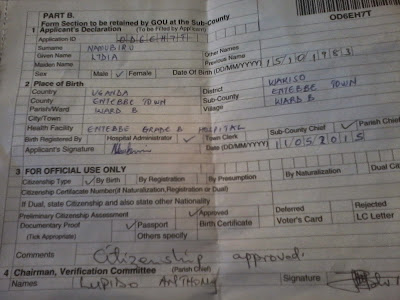