You lay to my left. A stream running over rocks, to my right. You said, "we could run away from it all, you know." I said I would like that very much.

We lay by each other for a while. A hour? Maybe just half of it?

We dreamed of an even sweeter heaven. A little hut up a hill in Kapchorwa. We would grow our own food. We would keep a million shillings on mobile money, for a health emergency. Nobody would know who we were or what we left behind. What we left behind would never know how to find us; probably wouldn't want to.

But then you glanced at your watch and we arose. Resurrected from heaven back into the hell of responsibility and routine.

Do you recall heaven?
Posted by NamLyd at 11:48 AM No comments:

Uganda's road network is kifuufu & will continue to be, for quite a while

CORRECTION: When I first published this post, I made I major , yet stupid, units error: reading & writing kilometres for metres. I have since corrected it. Moral: Never multitask internet arguments with actual writing you care about.

Uganda’s national roads (as opposed to local roads) are some 20,540 kilometres. Of these, only 20% are covered with bitumen, or tarmac, as it’s more commonly known. That’s just 4,059 kilometers of tarmac. But of that 4,059, only about 2,590 kilometres are termed as class A roads, by the national roads authority. You can download the entire dataset (obtained from the Uganda National Roads Authority in December 2017) from  Data dot UG, an  open data portal run by ACME. Or you could explore it visually using the map below.

Some might say that not every decent road, is a tarmac one. Yes, but even the national roads authority doesn’t grade any of the dirt roads as class A roads. Those only start at class B, a sort of, um, middle of the road classification. The worst is class C and that’s where 73% of our national roads network falls.

I am a bit surprised by the state of affairs, honestly. Yes, I am a city bird and it shows. Even the ka road going by my muzigo is tarmac. But that’s not it. It’s just that, for years now, we’ve invested what I thought was a staggering proportion of the budget to infrastructural development. This expenditure, has been only second to general public administration itself, at least according to the latest data I could find from the Uganda Bureau of Standards.

Between July 2011 and June 2016, we spent seven trillion, four hundred thirty six billion on infrastructure. We spent some more in the subsequent 18 months, obviously.  Yet still, only 13% of our road network looks anything like those pictures Mr Don Wanyama like to share on Twitter. What would it take to do achieve more scale? Are we ever going to afford meaningful scale?

I have heard that it currently costs about $683,000 construct a kilometre of road in Uganda. At that rate, if we wanted to tarmac all the roads that are currently considered Class C, we would need about 10.45 billion dollars for the job. That UGX 7.4 trillion shillings that I mentioned we spent on infrastructure over 5 years is like 2 billion dollars.

Oba tubileke bulesi? Lemme me go and research examples of countries which achieved middle income status without roads. In the meantime, here rest my plans for a 'country home.' I have allergies, banange.
Posted by NamLyd at 5:06 AM No comments:

About the Shrine in My Living Room 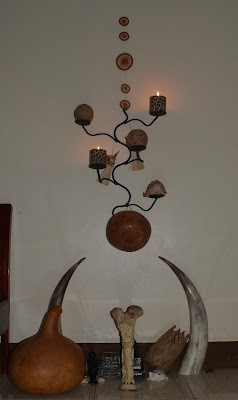 A while back, I wrote a post wishing that none my relatives chooses to become one of Prophet Mbonye’s remnants. It turns out, my wish was a bit too specific. I should have said, “I wish none of my relatives surrenders themselves to any modern diviner of any sort.” Even then, I would have been too late. It turns out, an entire section of my relatives has surrendered themselves to a modern diviner who is even crazier than Profit Mbonye. This is a really long story but the short of it is that this diviner/pastor has declared my mother a witch, against whom the entire family must gang up to defeat. Yeah, this stuff is actually that basic so feel free to go back to your day. I won’t blame you.

Are staying for the long and basic story? Are you one of those book nerds who will read anything anyone bothers to type out? Glad to have you. Let’s go to the very beginning.

My parents raised about seven children that were not biologically theirs. Then again, didn’t every Ugandan with a half-decent job in the 90s? It was a kind of survivor’s tax. Everyone who hadn’t been killed or maimed by the wars of our ‘liberators’ and also miraculously dodged the AIDS scourge that quickly followed, had to raise the children of those who hadn’t been as lucky. Wars, epidemics and the resulting hardships, maim societies in ways too many to list. They kill some of their best & strongest. They rob families of their livelihoods and breadwinners. They rob entire societies of their morals, turning men into rapists and child molesters, who leave underage mothers in their wake. For those who survive the carnage, those that live to rebuild a broken society, the burden is as mandatory as it’s back breaking. My parents ( and for that matter yours) didn’t raise an extra seven because they were saints. They didn’t have much of a choice. It had to be done.

I have always been a snoop. As a kid, I used to press my ear against the bathroom wall at home, to listen to my parents debate, not if they will take in another relative, but who to take in. We lived in a small, already crowded home. I guess they felt the bathroom was the only place that allowed them the privacy to have conversations they didn’t want us to hear. Alas, there was the small matter of my complete disregard for boundaries. Those conversations would go something like:
Ma: One of the boys. Men are expected to provide. If he doesn’t get an education and can’t do that, the future will be truly bleak for him.
Baba: It has to be one of the girls. A girl in the village is a defilement case waiting to happen. At 14, Sanyu has a baby. The same fate awaits the others.
Ma: Then, let’s bring Sanyu. She can leave the baby with its grandmother & resume school. The younger girls still have some years of safety.

And so more and more relatives came and went. Some came in as young as 5 and left after university. Others came in just to coast over a particularly hard up period back home. Maybe just for the O’level years or just that one university year following the passing of their own parent. In any event, my parents’ roof typically had at least 10 people under it. Home was so crowded, that as an adult, I don’t let my siblings ever sleepover.

Some large families thrive on the numbers and we too did for a while. Still, growing up, our home life was not a picnic in the park. There definitely wasn’t enough love to go around but there was plenty of parental stress for everyone to get some. To be honest, I think everyone felt unloved from time to time. Everyone except that one who was clearly Mami’s favourite. (I won’t name names here. You know yourself. When you got sick, Mami took you to Dr Seremba on Luwum street. When the rest of us got sick, we walked ourselves to Dick Medical Centre in the neighbourhood.)

Fast forward to adulthood. Against seemingly impossible odds, we all shored. We arrived, with a degree on each head and wide ranging unmet need for therapy. I have always thought my emotional issues from the crowded out childhood were major. Indeed, this blog acknowledges, “of course I have issues.” But… A story is told of a mad man who was picked off the streets and driven to Butabika in a police pickup. He had been there only a few days, when Museveni went visiting. Museveni was, as is typical, escorted by several pickups, sirens blowing, laden not just with regular police but the real military men. The mad man looked at the spectacle and said, “eh, I thought I was mad but this one has the mother of all madness.” When I first learnt of the madness of the other children of my parents’ household, I slapped my thighs and said, “I thought I was mad but these ones have all the ancestors of all madness.”

Speaking of ancestors… Some of my mothers’ ancestors were Rwandan. Her mother’s parents emigrated from Rwanda but had their children here. So, she is 2nd generation Ugandan, if you like. Yet, when the madness attacked our relatives, it zoomed them all the way to Rwanda. Apparently, these children who were raised by my mother have always wondered why she did it. Note that they don't wonder why my dad did it. The misogyny is alive and kicking. Anyway, they wonder why my mother kept picking children from the village, bringing them to her own house, as if she was the wealthiest relative who ever lived! They found the answer, in consulting a pastor. According to a church testimony given by one of them, this seemingly generous aunt brought them into her house to steal their destinies. Yes, to steal their destinies. It’s a thing. You can steal one person’s destiny and give it to another. In their case, their destinies were stolen by the evil (but seemingly generous aunt) and given to her biological children. That’s why my mother’s real children work abroad, while the others ( I suppose, the unreal ones) are here looking for jobs like typical Museveni youths. The unreal children aren’t complete idiots. They wondered about the mechanics of this destiny theft. How could it have happened without their knowledge all those years? Using what my brother hilariously calls, “their abstract thinking” they concluded, she has a witchcraft base in Rwanda.

The Rwandan witchcraft base is described as an eternally burning kyooto (fireplace) that my mother somehow keeps alive, even though she has never actually set foot in that country. It would seem to me that to keep a shrine alive in such a far away place would be strenuous, at least. I love my mother and she is growing old. To lessen her shrine maintenance burden, I have created a Kampala branch of the Rwandan kyooto. Right here in my Makindye living room. Tugenda ku baloga, ne Sitaani agambe “woowe!”

What’s the point of this post though? First, it’s a call for suggestions. What more can I add to my shrine to ensure my superstitious relatives never visit me again? 2) I would like to invite you to my house, now that I’m locally set up for the business of stealing destinies. To be honest, I could use some higher quality destinies. Even though my mother has been stealing and heaping destinies on me, I still can be seen navigating this town on a bodaboda, in the rain. I think these people’s destinies were kwara kwara, in the first place. Bring your destinies, all ye who were raised in Kololo and went to international schools. I need to upgrade.