Fork & Spoon Would Like to Thank Amama, M7 and OO for a Good Day on the Internet #TeamWork

This is a true story: my fork and spoon discuss w̶r̶e̶c̶k̶s̶  matters of national importance, all the time. 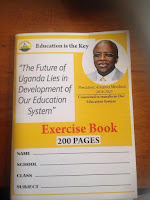 Fork: What is this?
Spoon: A book and a kofa set?

Fork: I can see that. But why are they yellow?
Spoon: Some books just are. Are you racist about books?
Fork: Ah, no.  Me, I am like WBS. Whatever the creature might be, I don’t care a damn about its race of colour. It’s just that these books are confusing. On the one hand, they are the kind of colour, a patriotic kid like the one of this house, should carry.  On the other hand, the picture on them looks suspiciously like the kind of thing that would induce Kayihura to emit teargas or a pink liquid which honestly would not look good at all against yellow. But where does madame de la maison find these things?
Spoon: On the internet.
Fork: Let’s go to the internet.
Spoon: Take my hand, good fella.
Fork: I think I found something.
Spoon: What?
Fork: A video that looks poised to go viral.

Spoon: Oh, sit down, amatuer! This isn’t the kind of thing that goes viral. This isn’t gangnum style. This is a video in which a man is drawling about the kind of things that sound new to politicians even after they’ve been repeating them for 30 years. Also, what’s up with those leaves in the background? Five minutes and they have not moved at all.
Fork: Spoon, you are usually smart and everything but on this, you are wrong. This is a good video. This is the kind video that can change the politics of a country forever. You know… Like a quiet revolution? That kind that infects you slowly and sweetly like a love song? I think that is what this guy is about. A quiet revolution. Like a love song, the magic is in its silent moments. Lethargy is the groove.
Spoon: The magic of silent moments indeed. That’s something that guy would know a lot about. After all those silent moments in which the country waited for him to tell it when he would tell it, he has cleared his throat for four minutes and closed with; “In the coming days, you will hear and read in greater detail about my plans.” Also, what’s up with those leaves? Why don’t they move ko a little bit? 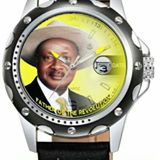 Fork:  Huh! And guess who is agreeing with you that this is a waste of time? The big man himself, chief opener of all the taps in Uganda, seer of the eclipse. Also known as “Father of the revolution,” by a watch that won’t do very well for telling the time after midday.
"I therefore do not think it is proper for the Rt Hon Mbabazi to waste your time with that premature electioneering." Museveni.
Spoon: Exactly. A guy who has helped himself to nearly 30 years of your time would know what wasting is proper for it. So I am out of here. Call me when Hitler reacts to this declaration.

Fork: Oh come on, watch the video. If you are accusing the first of being sterile, you'll love this one. Dude is completely panicked. They didn't even have time to cut and edit. He's in here snapping at his aides, "shut up." "amashomero" "just leave them (pictures of amashomero) here." Posted by NamLyd at 3:26 AM No comments:

Would the Grassroots Dry Up if NGOs Spoke More Organically? When I first joined the NGO sector, its big words were how I got through long boring meetings --- of which there are plenty. Listing each one that was dropped was my equivalent of doodling. Leverage, value proposition, mainstream, downstream, upscale, thematic areas, interventions (have to be multisectoral), deliverables, paradigms, verticals, attitudinal changes ....

Of course I am now an expert at rolling them off the tongue. In my current workplace where people are far less steeped in NGO culture, they depend on me to come up with just the weighty phrase needed to turn conversations into "citizen platforms for holding officialdom accountable." And, I deliver. Each and every time. After I have redeemed a sentence from the mundanity of "is and was"  and turned it into a venerable entity with "English that fills the mouth," I sit back, nod my head and think, "oh how I deserve my paycheck."

Nonetheless, I can't help imagining the kind of character Chinua Achebe might have constructed out of the likes of me. The modern day versions of the grandiloquent Secretary of the Union.

"The importance of having one of our sons in the vanguard of this march of progress is nothing short of axiomatic," says the Umofian orator, using the kind of English his audience admires, "the kind that fills the mouth like the proverbial dry meat." Chinua Achebe in Things Fall Apart.

Things hilariously fell apart on this subject yesterday when it came up on my Facebook wall. I am saving that here for posterity. Click through for the comments. They will 'Change Your Life', I promise, like a true NGO person.

The following are the crosscutting issues which are being mainstreamed, synchronised, and upscaled across all the three multisectoral interventions
Posted by Lydia Namubiru on Wednesday, 10 June 2015